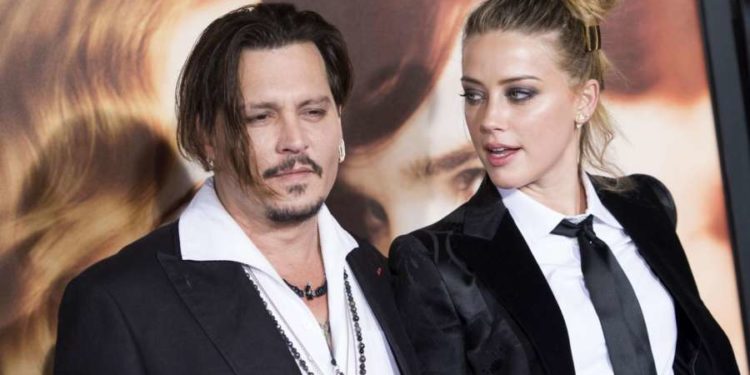 In 2009, Johnny Depp and Amber Heard met at the set of ‘The Rum Diary.’ Depp appeared as a journalist whereas Heard played the role of Chenault. The story was based on Hunter S. Thompson’s book. After working with Depp, Heard said that working with him was torture.

The couple started dating at the end of 2011. In 2012, Depp and his long-term girlfriend, Paradis announced their break up to the public after 14 years. In addition to that, Depp had two kids with her ex-partner Paradis named Lily-Rose and John Christopher.

Similarly, Heard broke up with her partner Tasya van Ree at the same time. According to a report, Heard was arrested in 2009. The reason is that she assaulted van Ree’s then-girlfriend at Seattle-Tacoma International Airport.

Is Heard wearing an engagement ring?

Based on a report, Depp and Heard got engaged. Heard has shared the picture with an ornate engagement ring. Depp confirmed that he got engaged and is going to marry soon. He also said that he was wearing a Chick’s ring.

In 2015, Depp married Heard in a simple marriage ceremony. They married in their home itself in Los Angeles with a few close friends. Depp and Heard breached the laws of Australia, as they failed to tell about their dogs. Then, the couple released the apology video for their mistake.

In 2016, Heard asked for a divorce from Depp, as he assaulted her it seems. At last, she obtained a temporary restraining order against this actor. According to Heard’s complaints of Heard, Depp abused her physically under the influence of drugs. Also, Depp threw his cell phone over the face of Heard at the time of filing for a divorce. But the police said that the incident didn’t happen. Depp also denied all such accusations of Heard.

Heard has asked for a settlement at Depp after withdrawing the domestic violence restraining order. She then asked for the spousal support of $50,000 per month.

Even after these problems and accusations, the couple has given a joint statement. In that statement, the couple was passionate about their relationship. Also, they never did anything to get financial gain. Then, Heard got $7 million as a divorce settlement. But she shared it with the charity organizations.

The Finalization of The Couple’s Divorce

Depp and Heard’s divorce came to the final stage in 2017. The couple faced a big problem when they failed to declare their animals in Australia. At the same time, Depp got the ownership of all properties such as Private Island in the Bahamas, classic cars, and motorcycles.

According to a reporter, there was a clause that is present in the settlement. Because of that clause, the couple didn’t share negatively about their relationship and break-up.

Johnny Depp and Amber Heard separated their ways after divorce. But again in December 2018, Heard complained against Depp for domestic violence. She talked about sexual violence in The Washington Post. But she didn’t mention the name of The Pirates of Caribbean’s actor in this interview. People get her point that she is referring to her ex-husband.

Now, it’s a turn for Depp to hit back at Amber Heard, as she accused him of abusing physically.  He filed a defamation lawsuit against her ex-wife, Amber Heard.

People are not aware of the fight between Depp and Heard. But soon after releasing this audiotape online, people were really shocked. After listening to this videotape, people supported Johnny Depp. Because the accusations of Heard are not true.

Judge Bruce D White asked Depp to file for defamation against Heard. Amber Heard cheated on Depp, as she was in a relationship with Elon Musk.

Heard and Depp were living a happy life for some time. But after some time, Heard started to make accusations against Depp. She made accusations on Depp that he assaulted her many times. But Depp’s ex-girlfriends denied all such accusations on Depp. All his partners were supporting Depp and they respect him a lot. He never abused or assaulted their ex-partners it seems.

According to an interview, Depp shared most of his views on Heard. He was not happy with her, as she is diagnosed with borderline personality disorder. Also, she is a narcissist and sociopath. Depp shared all these comments to the media about Heard.

Almost for 10 years, the couple was living together after which they decided to divorce. Amber Heard Johnny Depp took the case to the Royal Courts of Justice in Central London. Both of them have given almost 14 pieces of evidence of domestic violence. About this, even ‘The Sun Publisher NGN’ posted an article called a ‘Wife Beater.’

According to that article, Heard made accusations on Depp that he abused her physically and verbally throughout their relationship. Also, Depp beat, slapped, kicked, and punched her many times. But Depp said that he never abused Heard or any other woman in his life. Also, Heard cheated on him, as she was with Elon Musk while they were married.

All the above problems created a big gap between Depp and Heard. Thus, the couple decided to end this issue with a divorce.

To sum it up, the love story of Heard and Depp is not very attractive. Because the couple was happy for some time in their life. Throughout their life, they had several problems, accusations, etc. Coming to the net worth of popular actor Johnny Depp, it is around $200 million.

You may also like: 90 Day Fiancé’s Colt and Vanessa are Officially Married