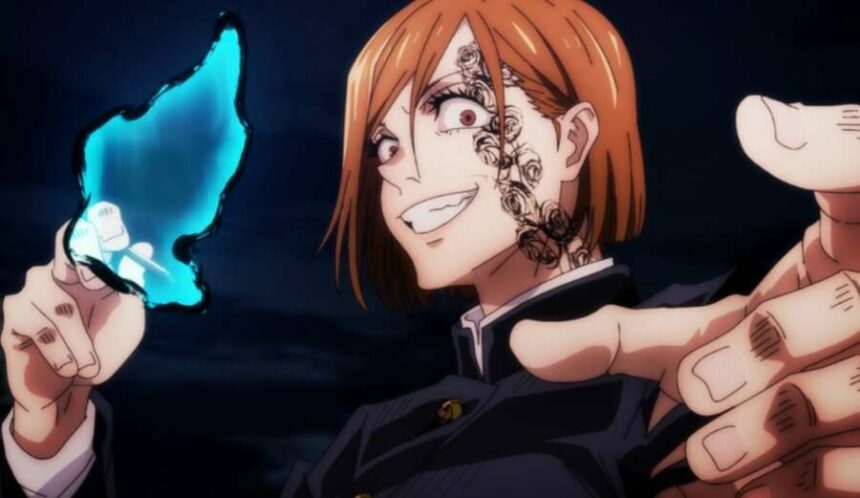 Is the information about Nobara Kugisaki death true? Is the character alive or dead? Can we now ever see Nobara Kugisaki returning to the story? Too many questions to answer, right? No need to worry, just sit back and relax.

We are here to answer all your queries related to your favorite Nobara Kugisaki. Below, we’ll state whether Nobara is alive or not. So, continue reading to get to know some really exciting facts about the story!

As a tale about sorcerers battling curses, Jujutsu Kaisen first appeared. Later, the plot took a darker, more brutal turn. But the idea was still the same. Anyone who is into reading the manga regularly is familiar with the twists Gege Akutami brings often.

We can call the eagerly anticipated Shibuya Arc a masterpiece. But it was also one that was difficult to get through. We saw the demise of a number of beloved characters.

There was no turning back once the manga started down this dark path. And things have turned fairly uncertain ever since. Nobara Kugisaki stood out among the cast as a fan favorite who was unexpectedly close to death during the battle.

Is Nobara Kugisaki dead? Fans are in shock and uncertainty after sighting her unconscious after a major battle. They are left to question if a vital character from the manga actually died.

Are the Beloved Characters Really Dying?

When it comes to writing, Gege Akutami never fails to wow us. In the first few chapters of the manga, he killed off his own protagonist as well as another character, Junpei. Even though I freely acknowledge that I find it painful to watch children suffer, these things serve as a wake-up call to reality.

Curses are dangerous, terrible creatures. Death is a clear result of having relations with curses, and fighting them is no easy task. However, no matter how much I try to interpret the text, it is difficult to get past the concept that our beloved characters can pass away.

Nobara Kugisaki’s current situation is one of the largest plot twists to date, which is utterly absurd. The makers made numerous confusing references to the story. Gege Akutami has been adamant about maintaining a high level of secrecy regarding the character’s situation. Nobara encounters Mahito during the Shibuya Arc.

And like every other Kugisaki battle scene, this turns into a fan-favorite moment. As the young sorceress puts the lethal curse through its paces. The strategy used by Nobara to fight the cursed wombs, which people already know, is one to adapt. Until he encountered Nobara, Mahito had no idea the extent of her destructive power.

One of the main reasons we adore Nobara is that Mahito must flee from her in order to survive. She does, however, briefly let her guard down toward the close of chapter 124. Until Mahito created his duplicate, she made sure not to be touched by him. Now she was looking for a way to get rid of him. Mahito accidentally touches her eye in this brief moment. While the curse escapes, Itadori runs to her.

Nobara’s flashbacks are the first chapter after that. She can be slashing her eye in chapter 125, stating that she would prefer to do that to change. In doing so, she instructs Itadori to inform everyone that it “wasn’t so horrible”.

Is Nobara Kugisaki death news true? Let’s see! Nobara was unconscious, but there was still hope that she might be alive. The character wasn’t addressed for 20 chapters after that. Itadori inquires about Itadori in a talk with Megumi, who remains silent in response. Itadori’s initial response is one of pain.

Silence is not a proper answer, yet, to definitively declare Nobara Kugisaki’s death. When Gege Akutami revealed that Nobara died in chapter 125, things started to make more sense. He even spoke of no availability of hospitals in Shibuya when the incident happened. But when they described her condition as “unspecified,” everything grew blurrier.

From this series of events, it is only possible to infer that the statement about Nobara Kugisaki death is somewhere true. Nobara actually passed away during her battle with Mahito. She may have, however, revived herself in some manner.

Given what happened to Yuji during his fight with Yuta, it’s not wholly impossible. Using the reverse cursed technique, Yuta not only revived Yuji after his death. She might be receiving treatment from Shoko at this time, and her condition is likely severe.

We haven’t addressed Nobara Kugisaki since chapter 141. So, it’s a bit difficult for us to decide whether Nobara Kugisaki’s death is real or not. However, all his fans hope he makes a comeback soon!

Also read: Mikey In Tokyo Revengers: How Old Is He?

Know About Kali Muscle Net Worth in 2022?