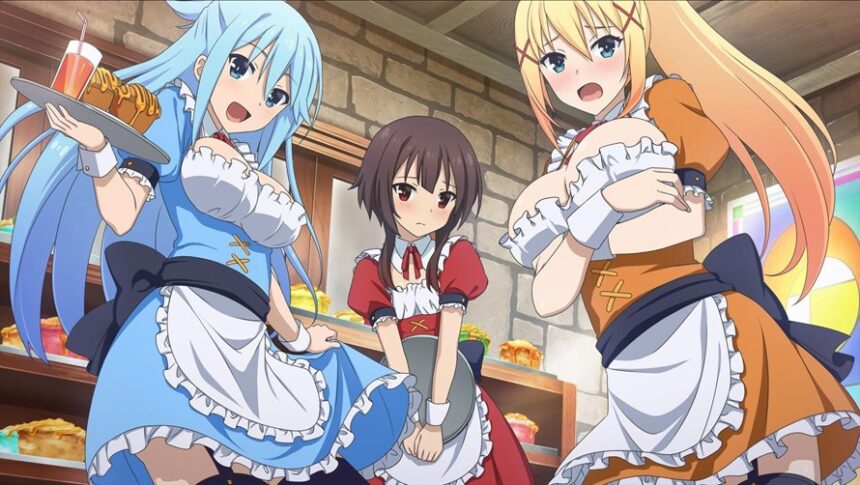 On our list of top Adult Anime, here comes the first one, Overlord2!

The last half-hour of the well-known virtual reality game Yggdrasil has arrived. However, as the servers start to shut down, Momonga, a formidable wizard and the leader of the evil guild Ainz Ooal Gown, chooses to spend his final minutes in the game.

To his amazement, Momonga is still fully alive despite the time having passed midnight. And both his character and the non-player characters seem to have their own personalities.

Momonga orders his obedient servants to assist him in exploring. Plus, takes control of this new world when he discovers this unusual scenario. He does this to determine what has caused this development. And whether any other people might be experiencing a similar situation.

Second on the list of Adult Anime is “Highschool DxD”. The narrative centers on Issei Hyodo, a dim-witted and lecherous second-year high school student, murdered by a woman during his very first date. Issei is transformed into a devil.

And, as of that moment, he works as an underling for Rias Gremory, a high-level devil who is also the most attractive student in Issei’s college.

The adult anime-“Maria The Virgin Witch” centers on Maria, one of the most formidable witches of her time, and is set in France during the Hundred Years’ War. By using her succubus and incubus familiars to influence the opposing sides and massive illusions, she intervenes against the warring nations to protect the populace and preserve peace.

She thus earned the respect of a few locals as well as the animosity of the Church, which sees her as a heretic. Maria, however, is still a virgin, and her familiars make fun of her for it.

As word of her acts spreads, Archangel Michael concentrates on Maria and condemns her interference in people’s lives. In the end, Michael decrees that Maria will lose her magical abilities if she loses her virginity. And also prevents her from performing magic in public, sending an angel named Ezekiel to enforce this ruling.

Next on our list of adult anime is “Osake Wa Fuufu Ni Natte Kara”. The company’s assistant manager, Chisato Mizusawa, is quiet but competent and attractive. She possesses a little-known fact about herself that only her spouse Sora is aware of. This includes that she enjoys consuming alcohol. Further, she enjoys the beverage Sora makes and becomes calm and inebriated even tonight.

Her mother’s remarriage leads Yuzu Aihara, a stylish, impulsive, and fun-loving city girl, to transfer to a new high school and neighborhood. Yuzu was more into boys and shopping rather than academics.

So, she struggled to fit in at the traditional girls’ school. Also, often has disagreements with the student council, specifically Mei Aihara. Moreover, Mei was the diligent, stunning student council president.

Further, Mei turns out to be Yuzu’s new step-sister. Because of this, Yuzu had no choice but to share a bedroom with someone she hates. The two girls’ relationship changes with time.

Yuzu gradually comes to terms with the fact that she is beginning to feel romantic feelings for her younger sister. While the girls’ animosity gradually lessens as they get to know one another better.

If we are talking about top Adult Anime, how can we not include this on our list?

To the charming and competent class representative Akiho Kousaka, Haruka Shinozaki confesses. Although Kousaka takes dating just as seriously as she does everything else, she still determines what it is all about. She advises sexual actions practically.

Makoto Shiranui has always idolized Mamoru Hoshisato, a renowned magician and a family friend. He also decided to move to Tokyo to work as his apprentice. Moreover, Makoto made this decision after witnessing a magic performance Mamoru and his wife Maeve performed.

The couple’s daughter and childhood friend, Kana, goes by the moniker Hatena. Makoto relies on Hatena’s reassuring side as the rush and bustle of life in Tokyo catch him off guard, such as burglaries by a gorgeous crook.

The family’s butler, maid, Jeeves, and Emma, as well as Hatena, welcome him to Hoshisato’s now-haunted mansion where he hopes to reunite with his childhood friend. However, he soon finds that the three are no longer compatible.

Misa Td, Aoi Miyamori, Shizuka Sakaki, Ema Yasuhara, and Midori Imai, a group of five closest friends, are the plot’s focus. After getting experience in their high school’s animation club, they all work in the anime industry. Moreover, they all hoped to one day create an actual anime together.

So, this was a complete list of top Adult Anime, according to us. These anime are only for 18+ and probably go on air after 10 at night when the kids are asleep. So, go through the list and have fun!