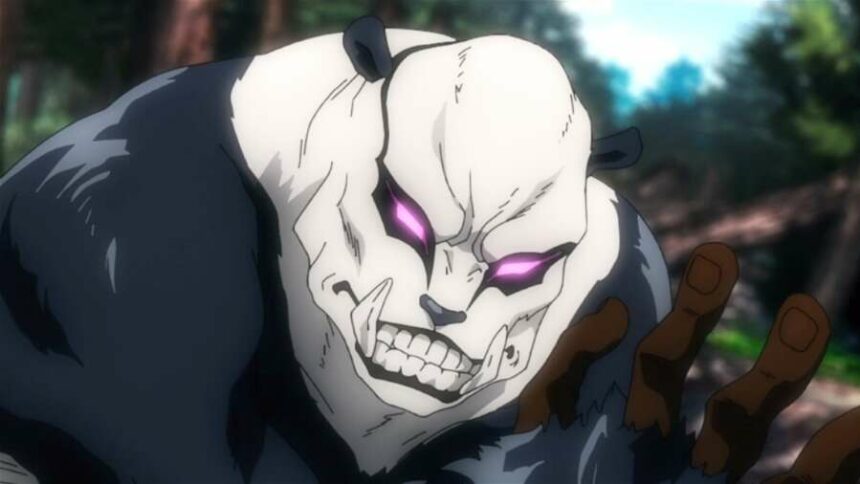 The finest moment to switch to “Jujutsu Panda” if you have been missing Kungfu Panda for the previous five years is right now. Yes, I’m referring to the adorable and cuddly Panda senpai from the Jujutsu Kaisen series. Don’t let his fluffy façade fool you, though. He is a nightmare dressed as a daydream, and he may transform into a vicious monster in a matter of seconds.

Panda possesses the most intricate past of all the Jujutsu High seniors and the most complicated cursed techniques. He is not a person, an animal, or even a cursed puppet; rather, he combines elements of the things I just listed.

Panda knocked Todo off balance with just one hook, so you know he’s pretty strong. But what’s the secret to this potential? Is he an evil puppet? or significantly more? We present all of the information we currently have about Panda Jujutsu Kaisen.

Masimichi Yaga started as one of the puppet jujutsu sorcery, a method that was too difficult for a normal person to comprehend. Panda, whom Yaga treated like his own child, is his finest work of art. Panda doesn’t run out of cursed energy as other cursed corpses do, and he is also uncontrollable.

To defend this forbidden jujutsu, Principal Yaga ultimately gave his life. He was aware that, in the wrong hands, anyone might have amassed a force of cursed corps with a never-ending source of cursed energy.

We know about Panda Jujutsu Kaisen birth because of the descriptive way Akutami sensei explains a cursed technique. The cores of the cursed corpses, which contain the information stored in the soul, were first made by Yaga. He utilized three compatible souls that work flawlessly together in the case of an Abrupt Mutated Cursed Corpse-like Panda.

The cursed corpse eventually gained self-awareness when the cursed cores stabilized over several challenging weeks. The cursed thing learned to refresh its cursed energy on its own like a jujutsu sorcerer after months of these difficult procedures. Panda Jujutsu Kaisen took birth in this way.

Unlike anything we’ve seen in Jujutsu Kaisen, Panda’s anatomy is unique. Panda’s three cores—his siblings and himself—allow him to change his body and abilities to suit his needs.

As you may have guessed, these three cores are made up of Panda and his two siblings. Yaga claims that Panda possesses two siblings who can lend him their powers when needed.

This form is of the balancing type and is well recognized as a transformation with a single goal. In this situation, Panda often maintains his composure. In addition, he prefers to maintain this form over most of the day because it uses very little cursed energy to keep so. While in this mindset, he is most effective for mid-range combats and rarely acts impulsively. For tasks involving stealth or surveillance, it is ideal.

We could need a gorilla to handle the task in severe cases that are out of a panda’s league. What could be better at this point than having a gorilla power your sleeve? And to change into a fully functional Gorilla, he needs an easy trigger. The gorilla core is much more aggressive than the previous one, as you can tell from its angry face.

You might even have trouble understanding his band once he turns to this core since he becomes an entirely new person. This mode is ideal for a close-quarters fight because it instantly increases his power, stamina, and speed.

Before Gorilla mode’s powerful blows, not even a talented sorcerer like Mechmaru had a chance. It quickly depletes Panda’s cursed energy store, so this amazing power has a price. He, therefore, chooses not to maintain this form for very long.

What is Panda’s Third Core?

The series has not yet disclosed the identity of Panda’s third core. Sadly, he previously damaged this core during his battle with Mechamaru, and it is impossible to determine whether it can be repaired.

Regardless, we can infer a general idea of his third core from what he said about it. Since the third core is meant to be the antithesis of Gorilla, he called it the shy one, which makes perfect sense. (Panda strikes a balance between the other two cores.) What animal comes to mind when you read this? A little, cunning, strong creature falls between a squirrel and a koala.

Know About Other Notable Features of Panda

A panda is a cursed corpse because it can withstand extreme damage. He puts a lot of reliance on anticipating the movements of his rival and making adjustments. It’s nearly impossible to read his movements because, as I just mentioned, he has a massive reserve of cursed energy that flows through three different cores.

The word that best describes him and distinguishes Panda Jujutsu Kaisen from the others is “unpredictability.” In terms of personality, he is more sympathetic than most other Jujutsu Kaisen characters.

He has a genuine heart for those around him and is willing to go above and beyond for his friends. Consequently, it is safe to say that in this crazy world of curses and all other cool beings, all it takes is a panda to steal the show.