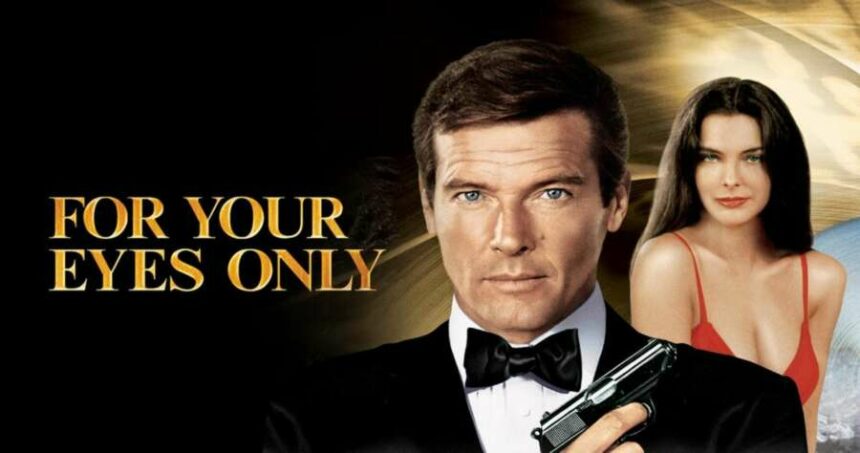 Where was for your eyes only filmed? This question must be coming into your mind if you saw the movie – For Your Eyes Only.

Well, anything else about a movie that draws viewers aside from the plot is its filming location. Filming locations are a major factor in a movie’s success. A thorough understanding of such a movie would be fascinating. in particular, a blockbuster movie.

Today’s topic is the popular British spy movie For Your Eyes Only. This movie’s success was mainly due to the direction, supporting actors, setting, and spectacular effects. Today’s article will describe where was for your eyes only filmed. We will also go over the film’s synopsis.

James Bond in ‘For Your Eyes Only’

If you enjoy James Bond movies, you probably already know that the letter M often appears in his movies. However, M wasn’t in the movie For Your Eyes Only. Audiences know this movie, which features some of the most breathtaking scenery as one of the most unforgettable Bonds in history.

In this movie, James Bond is about to go on one of his most thrilling adventures as he competes in a free-for-all of bizarre, thrilling encounters and thrilling journeys. John Glen, who previously served as the second unit’s director and editor on a couple of James Bond’s prior movies, is the film’s director. The best performance of his career, without question.

Roger Moore, on the other hand, plays Agent 007 with ruthless tenacity. Moreover, this movie drew people from all around the world.

Where was ‘For Your Eyes Only’ Filmed?

If you’re wondering where was ‘For Your Eyes Only’ filmed, we can tell you that it was filmed in several different locations. The North Sea, Greece, Kanoni, Italy, Spanish Villa, and The Bahamas are just a few of the locales where the production team shot the movie’s action sequences.

The team shot For Your Eyes Only on the North Sea for three days outside of St. Georges began on September 2, 1980. At Villa Sylva in Canon, just above the City of Corfu, the major photography started on September 15. These factors led to the whitewashing of numerous local homes.

The makers filmed the incident with the help of a stunt driver, Rémy Julienne, in 12 days. Achilleion and Meteora were the Greek locations where the director filmed the movie. The Greek bishop received payment to permit recording in monasteries during the shooting at Meteora. A second unit, however, shot underwater scenes in the Bahamas.

The recording was done in February after the production was moved to Cortina d’Ampezzo, Italy, on January 1, 1981. The production, however utilized the church at Stoke Poges, Buckinghamshire, as a graveyard in several previous credits. At London’s Beckton Gas Works, the makers filmed the helicopter shots.

Know About Where was ‘For Your Eyes Only’ Filmed, Storyline And Cast

This year marks the 41 anniversary of the 1981 release of ‘For Your Eyes Only’, the 12th episode of the long series, and Roger Moore’s sixth appearance as a guy in a tuxedo. The movie was by EON Productions or United Artists. Further, directed by John Glen and produced by Albert R. Broccoli.

For Your Eyes Only premiered in around 1100 North American theatres in Canada on Friday, June 26. After Moonraker, the movie earned $54.8 million in the US, making it the second most successful Bond movie ever. The last James Bond movie to release solely by United Artists was this one.

The film’s story has an intriguing beginning. James Bond returns to the ATAC, which is inside the sinking spy ship St. Louis. Georges. Bond first finds and defeats a covert spy in France. Further, Bond continues his pursuit of the Cuban assassin in Canada and takes revenge.

Then, in the Bahamas, after rapidly putting an end to some Cuban rebels, Bond settles down to read the memoir of a former boss who is now the wife of a millionaire. This provides nations complete control over the Polaris nuclear submarine. Bond instantly accuses a man called Kristatos of taking her when MI6 sends him into the struggle. The movie fragments into various segments.

Moreover, in this article, we have stated where was ‘for your eyes only’ filmed! The movie’s runtime is 127 minutes and ranked #242 for #1981. It further is available in English, Greek, and Italian. It is an adventure, action and thriller movie, which we are sure you’ll love to watch. So, what are you waiting for if you haven’t seen it yet? Go watch it!

Also read: The Best Romantic Comedies for a ‘90s kid